The dual role of OX40 creates a tumor microenvironment that is more conducive to the initiation of anti-tumor immune responses. Our own-developed humanized mouse model of OX40 provides a powerful tool for further research on the efficacy, potency and adverse effects of OX40-related drugs. Unlike traditional immunodeficient mice, humanized OX40 mice not only carry human OX40, but also have a complete immune system and are therefore a more relevant, reliable, and accurate type of model.

The process of T cell stimulation

The stimulation of T cells by antigens undergoes four phases, including activation, expansion, contraction, and the development of long-term memory. Upon antigen stimulation, naive Ag-specific T cells proliferate and form a pool of effector T cells. When the antigen is removed, antigen-specific T cells contract and leave a small population of memory T cells.

OX40 is a costimulatory molecule expressed on the surface of activated cytotoxic T cells and regulatory T cells (Treg cells). The interaction of OX40 and OX40L has been reported to recruit TNFR-associated (TRAFs) molecules to the intracellular domain of OX40. TRAF2 and 3 can activate the classical NF-κB1 pathway or the non-canonical NF-κB2 pathway, both of which are critical for cell survival.

OX40 signaling can increase the ability of activated CD4 + T cells to secrete cytokines, such as IL-2, IL-4, IL-5, and IFN-γ. It has been clearly demonstrated that OX40 signaling can enhance the development of Th1 and Th2 cells. T cells stimulated by OX40 also increase the expression of receptors, such as IL-7Rα (CD127), IL-2Rα (CD25) and IL-12Rβ2, associated to the survival of T cells. 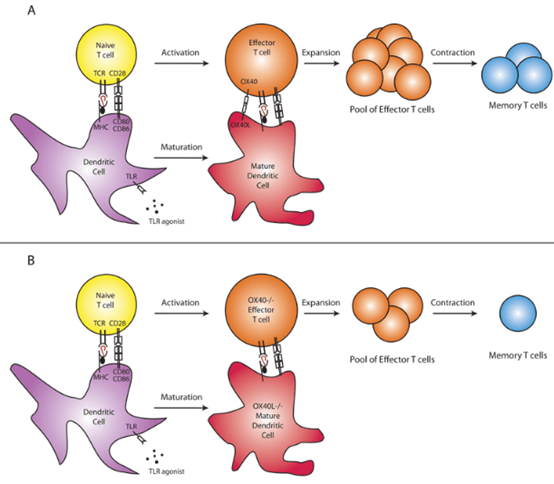 It is well known that the role of Tregs is to restrict immune responses. OX40-OX40L signaling can reduce the production of Tregs and block the ability of Tregs to inhibit T cells. By inhibiting the immunosuppressive effects of Tregs and limiting the size of Treg population, OX40 can further amplify the activation of T cells. 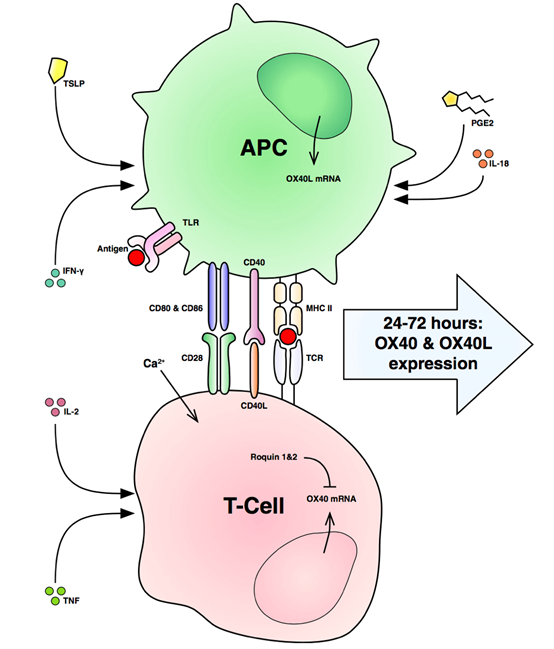 Figure 2. OX40 and OX40L expression, interaction and molecular consequences. None or minimal OX40 and OX40L is expressed. Expression of both is increased by antigen presentation to the T cell receptor and the engagement of co-stimulatory molecules (CD28 with CD80 and CD86, and CD40L with CD40) in a mechanism that involves the influx of calcium. OX40L is expressed on both APC and T cell, while OX40 expression is limited to T cell. Arrows denote positive effects; barred lines denote negative effects. And factors affecting expression are highlighted. (Webb G.J., 2016)

It is well known that the dual role of OX40 creates a tumor microenvironment that is more conducive to the initiation of anti-tumor immune responses. Our humanized mouse model of OX40 provides a powerful tool for further research on the efficacy, potency and adverse effects of OX40-related drugs. Unlike traditional immunodeficient mice, humanized OX40 mice not only carry human OX40, but also have a complete immune system and are therefore a more relevant, reliable, and accurate type of model. 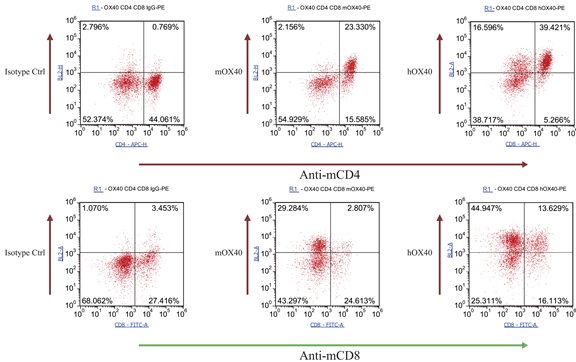 Figure 3. Expression of OX40 in the spleen lymphocytes of humanized OX40 mice is detected by FACS.

The spleen lymphocytes of heterozygous humanized OX40 mice were activated by anti-CD3 and anti-CD28 for 48 hours, and then collected for staining. Along with a group undergoing no stimulation, the expression of murine and human OX40 was detected by FACS. The results showed that the active expression of human OX40 can be detected in both activated CD4+ and CD8+ T lymphocytes collected from heterozygous humanized OX40 mice, and the expression trend of human OX40 and murine Ox40 was similar. 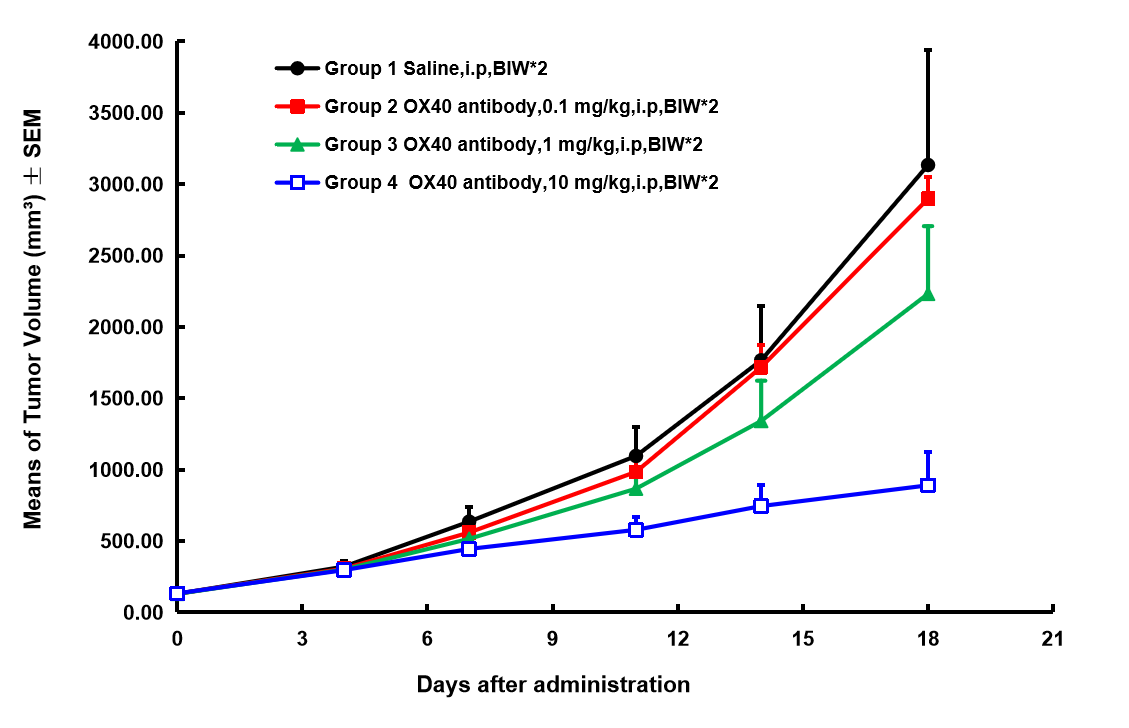 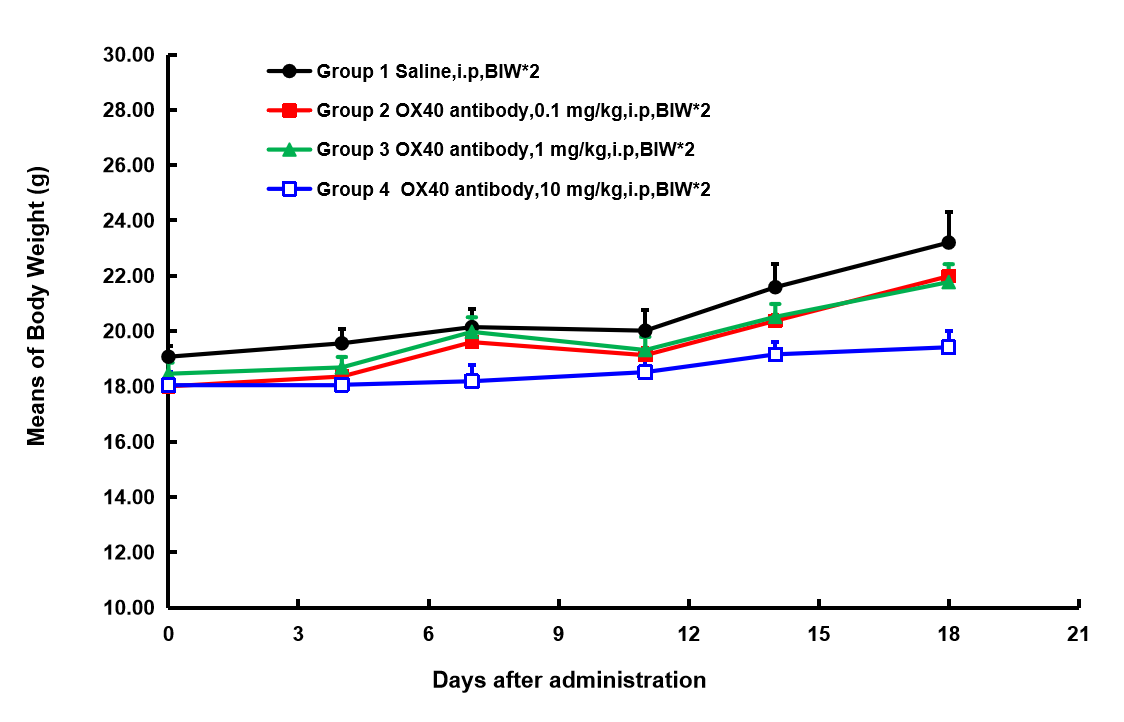 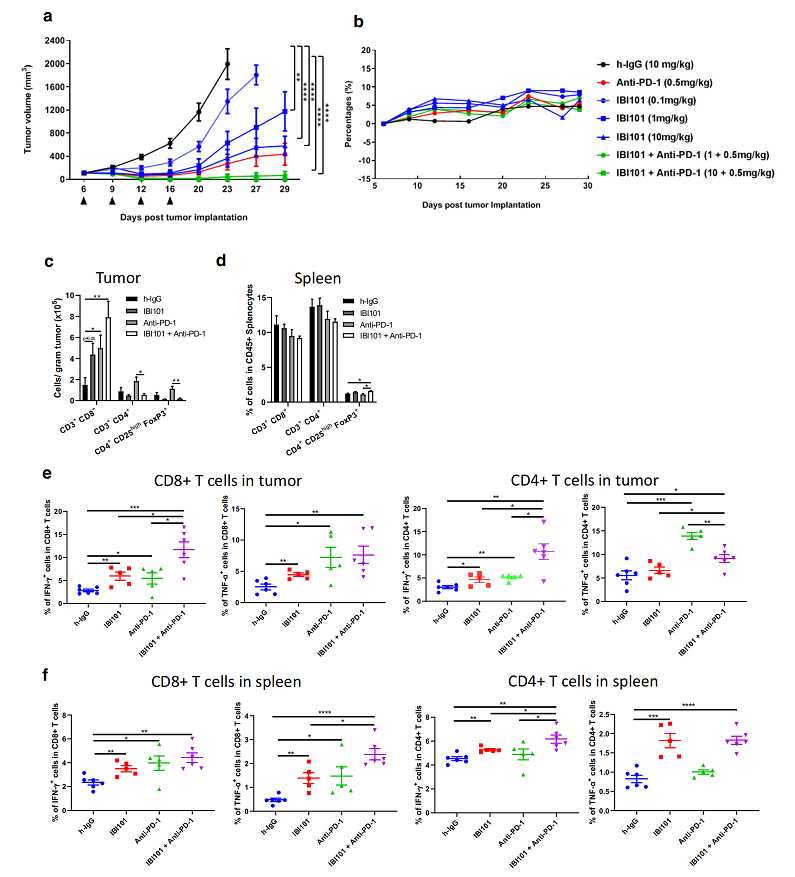 Fig. 5 IBI101 showed dose-dependent anti-tumor activity and  enhanced tumor-specifc CD8+ T cell response in human OX40  knock-in mice bearing MC38 tumors. a Tumor growth curve of mice  treated with diferent doses of IBI101 alone or in combination with  anti-mouse PD-1 antibody. Diferent doses of IBI101 and anti-mouse PD-1 antibody were administrated as indicated by the arrow heads  after MC38 cells implantation. b Animal body weights were measured during the time course of the experiment. c Mice were injected with h-IgG (10  mg/kg), IBI101 (10  mg/kg), anti-PD-1 (0.5  mg/kg)  alone or IBI101  (10 mg/kg)+anti-PD-1  (0.5 mg/kg) at day 10 and  14 post tumor cell implantation. At day 17, tumor and spleen were  collected and analyzed by fow cytometry for the absolute counts of  the indicated cell subsets in tumor and d proportions of indicated cell  subsets in CD45+ splenocytes. Flow cytometry results showing the  proportions of cytokine-secreting cancer-specifc CD8+ and CD4+ T  cells from tumor (e) and spleen (f) (n≥5) (In collaboration with Innoventbio)